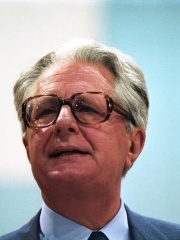 Hans-Jochen Vogel (3 February 1926 – 26 July 2020) was a German lawyer and a politician for the Social Democratic Party (SPD). He served as Mayor of Munich from 1960 to 1972, winning the 1972 Summer Olympics for the city and Governing Mayor of West Berlin in 1981, the only German ever to lead two cities with a million+ inhabitants. He was Federal Minister of Regional Planning, Construction and Urban Development from 1972 to 1974, and Federal Minister of Justice from 1974 to 1981. Read more on Wikipedia

Among politicians, Hans-Jochen Vogel ranks 10,660 out of 15,577. Before him are Jean Béliveau, Eberhard II, Count of Württemberg, Duke Eugen of Württemberg, José Canalejas, Zipoetes I of Bithynia, and Gregoria. After him are Cniva, David Johnston, Eutropia, Johann Niemann, Cædwalla of Wessex, and Marie I, Countess of Boulogne.