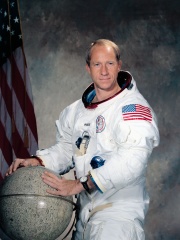 Alfred Merrill "Al" Worden (February 7, 1932 – March 18, 2020; Col, USAF) was an American astronaut and engineer who was the command module pilot for the Apollo 15 lunar mission in 1971. One of only 24 people to have flown to the Moon, he orbited it 74 times in the command module (CM) Endeavour. Worden was born in Michigan in 1932, and spent his early years on farms. Read more on Wikipedia

Since 2007, the English Wikipedia page of Alfred Worden has received more than 359,969 page views. His biography is available in 23 different languages on Wikipedia making him the 93rd most popular astronaut.