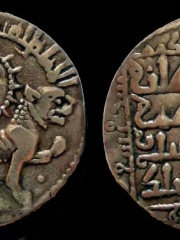 Gurju Khatun (Georgian: გურჯი-ხათუნი, Gurji-xatuni) (fl. 1237-1286) was a Georgian royal princess from Bagrationi dynasty and principal consort of Sultanate of Rum being favorite wife of sultan Kaykhusraw II, whom she married after the death of Muhammad II of Khwarazm in 1237. After his death in 1246 she married the Anatolian strongman Pervane. Read more on Wikipedia

Since 2007, the English Wikipedia page of Gurju Khatun has received more than 15,766 page views. Her biography is available in 15 different languages on Wikipedia. Gurju Khatun is the 2,090th most popular writer.

Among people born in 1227, Gurju Khatun ranks 4. Before her are Pope Nicholas IV, Elisabeth of Bavaria, Queen of Germany, and Rostislav Mikhailovich. After her are Chabi and John Peckham. Among people deceased in 1286, Gurju Khatun ranks 6. Before her are Eric V of Denmark, Bar Hebraeus, Alexander III of Scotland, Zhenjin, and William of Moerbeke. After her are John I, Duke of Brittany, Abu Yusuf Yaqub ibn Abd al-Haqq, Ibn Sa'id al-Maghribi, and Sophia of Denmark.