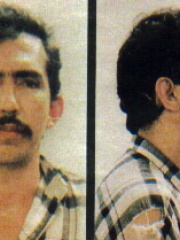 Luis Alfredo Garavito Cubillos (born January 25, 1957), also known as La Bestia ("The Beast") or Tribilín (named after the Disney character "Goofy") is a Colombian rapist and serial killer. In 1999, he admitted to the rape, torture and murder of 138 boys and teenagers. His victims, based on the locations of skeletons listed on maps that Garavito drew in prison, could exceed 300; Garavito continues to confess to more murders. Read more on Wikipedia

Since 2007, the English Wikipedia page of Luis Garavito has received more than 2,662,917 page views. His biography is available in 24 different languages on Wikipedia making him the 139th most popular extremist.

Among EXTREMISTS In Colombia

Among extremists born in Colombia, Luis Garavito ranks 2. Before him are Pedro López (1948).