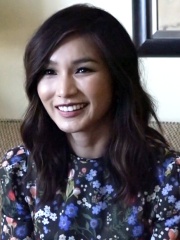 Gemma Chan (born 29 November 1982) is an English actress. Born and raised in London, Chan attended the Newstead Wood School for Girls and studied law at Worcester College, Oxford before choosing to pursue a career in acting instead, enrolling at the Drama Centre London. Chan was subsequently cast in various supporting roles on television, including Doctor Who, Sherlock, Secret Diary of a Call Girl, Fresh Meat, Bedlam and True Love. Read more on Wikipedia

ComicBook.com
Eternals Star Gemma Chan Shares New Set Photos Featuring Harry Styles
Eternals finally hit Disney+ yesterday, and it's been a major topic among Marvel fans on social media. Ever since the movie was released in theaters back in November, Gemma Chan (Sersi) has shared some fun content from the set on social media. Fans especially…
Jamie Jirak
Daily Mail
Gemma Chan poses with Harry Styles while on the set of Eternals
The former One Direction star, 27,  who plays Starfox in the Marvel film, looked in good spirits as he posed with the actress, 39, in full costume.
Ella Hodson