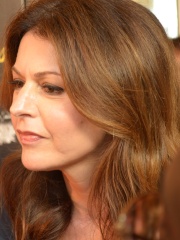 Jane Elizabeth Leeves (born 18 April 1961) is an English actress. She played Daphne Moon on the television sitcom Frasier from 1993 until 2004, for which she was nominated for an Emmy Award and a Golden Globe Award. She is also known for her role as Joy Scroggs on TV Land's sitcom Hot in Cleveland.Leeves made her screen debut with a small role in 1983 on the British comedy television show The Benny Hill Show, and appeared as a dancer in Monty Python's The Meaning of Life. Read more on Wikipedia

Since 2007, the English Wikipedia page of Jane Leeves has received more than 4,058,505 page views. Her biography is available in 21 different languages on Wikipedia making her the 7,026th most popular actor.