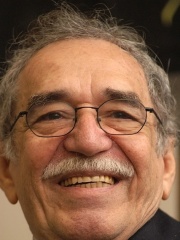 Gabriel José de la Concordia García Márquez (American Spanish: [ɡaˈβɾjel ɣaɾˈsi.a ˈmaɾkes] (listen); 6 March 1927 – 17 April 2014) was a Colombian novelist, short-story writer, screenwriter, and journalist, known affectionately as Gabo ([ˈɡaβo]) or Gabito ([ɡaˈβito]) throughout Latin America. Considered one of the most significant authors of the 20th century, particularly in the Spanish language, he was awarded the 1972 Neustadt International Prize for Literature and the 1982 Nobel Prize in Literature. He pursued a self-directed education that resulted in leaving law school for a career in journalism. Read more on Wikipedia

Gabriel García Márquez is most famous for his novel One Hundred Years of Solitude, which was published in 1967. The novel is set in the fictional town of Macondo, and tells the story of seven generations of the Buendía family.

Among WRITERS In Colombia