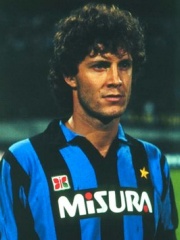 Fulvio Collovati (Italian pronunciation: [ˈfulvjo kolloˈvaːti]; born 9 May 1957) is an Italian former footballer, who played as a defender. He was a stopper (a man–marking centre-back in Italian football jargon) and also played for Italy at international level, winning the 1982 FIFA World Cup. As a player, he was regarded as one of Italy's best defenders during the 1970s and 1980s. Read more on Wikipedia

Since 2007, the English Wikipedia page of Fulvio Collovati has received more than 78,054 page views. His biography is available in 29 different languages on Wikipedia making him the 2,224th most popular soccer player.