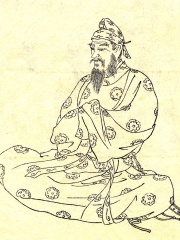 Fujiwara no Fuhito (藤原 不比等: 659 – September 13, 720) was a powerful member of the imperial court of Japan during the Asuka and Nara periods. Second son of Fujiwara no Kamatari (or, according to one theory, of Emperor Tenji), he had sons by two women, and those sons were the founders of the four principal lineages of the Fujiwara clan: the South, North, Ceremonial, and Capital lineages. Also, he had four daughters by two other women, three by Kamohime, one by Tachibana no Michiyo. Read more on Wikipedia

Since 2007, the English Wikipedia page of Fujiwara no Fuhito has received more than 36,748 page views. His biography is available in 17 different languages on Wikipedia making him the 8,617th most popular politician.

Page views of Fujiwara no Fuhitos by language

Among politicians, Fujiwara no Fuhito ranks 8,574 out of 14,801. Before him are Bogud, Ioannis Georgiadis, Ashikaga Yoshimochi, Princess Marie Louise of Bulgaria, Irina Rodnina, and Eudoxia Streshneva. After him are Charles Stewart Parnell, Margaret, Countess of Blois, Dan Quayle, Ioannis Kolettis, Appius Claudius Pulcher, and Sati Beg.