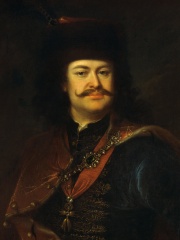 Francis II Rákóczi (Hungarian: II. Rákóczi Ferenc, Hungarian pronunciation: [ˈraːkoːt͡si ˈfɛrɛnt͡s]; 27 March 1676 – 8 April 1735) was a Hungarian nobleman and leader of the Hungarian uprising against the Habsburgs in 1703-11 as the prince (Hungarian: fejedelem) of the Estates Confederated for Liberty of the Kingdom of Hungary. He was also Prince of Transylvania, an Imperial Prince, and a member of the Order of the Golden Fleece. Today he is considered a national hero in Hungary. His full title was: Franciscus II. Read more on Wikipedia

Among politicians, Francis II Rákóczi ranks 1,526 out of 15,710. Before him are Hiero II of Syracuse, Edward of Westminster, Prince of Wales, Rafael Trujillo, Childebert I, Florianus, and Gaston, Duke of Orléans. After him are Joan II of Navarre, Conrad I of Germany, Gannicus, Ladislaus I of Hungary, Dongmyeong of Goguryeo, and Manco Cápac.