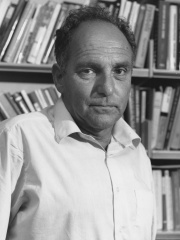 Ernest André Gellner FRAI (9 December 1925 – 5 November 1995) was a British-Czech philosopher and social anthropologist described by The Daily Telegraph, when he died, as one of the world's most vigorous intellectuals, and by The Independent as a "one-man crusader for critical rationalism".His first book, Words and Things (1959), prompted a leader in The Times and a month-long correspondence on its letters page over his attack on linguistic philosophy. As the Professor of Philosophy, Logic and Scientific Method at the London School of Economics for 22 years, the William Wyse Professor of Social Anthropology at the University of Cambridge for eight years, and head of the new Centre for the Study of Nationalism in Prague, Gellner fought all his life—in his writing, teaching and political activism—against what he saw as closed systems of thought, particularly communism, psychoanalysis, relativism and the dictatorship of the free market. Among other issues in social thought, modernization theory and nationalism were two of his central themes, his multicultural perspective allowing him to work within the subject-matter of three separate civilizations: Western, Islamic, and Russian. Read more on Wikipedia

Ernest Gellner is most famous for being a scholar of nationalism and for his contributions to the theory of modernization.