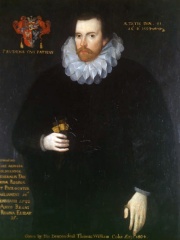 Sir Edward Coke ( "cook", formerly ; 1 February 1552 – 3 September 1634) was an English barrister, judge, and politician who is considered to be the greatest jurist of the Elizabethan and Jacobean eras.Born into an upper-class family, Coke was educated at Trinity College, Cambridge, before leaving to study at the Inner Temple, where he was called to the Bar on 20 April 1578. As a barrister he took part in several notable cases, including Slade's Case, before earning enough political favour to be elected to Parliament, where he served first as Solicitor General and then as Speaker of the House of Commons. Following a promotion to Attorney General he led the prosecution in several notable cases, including those against Robert Devereux, Sir Walter Raleigh, and the Gunpowder Plot conspirators. Read more on Wikipedia

Since 2007, the English Wikipedia page of Edward Coke has received more than 421,504 page views. His biography is available in 15 different languages on Wikipedia making him the 14th most popular judge.

Among people born in 1552, Edward Coke ranks 16. Before him are Henri, Prince of Condé, Edmund Spenser, Petrus Plancius, Agrippa d'Aubigné, Dom Justo Takayama, and Pietro Cataldi. After him is Richard Hakluyt. Among people deceased in 1634, Edward Coke ranks 7. Before him are Albrecht von Wallenstein, Hendrick Avercamp, Adriano Banchieri, John Webster, Urbain Grandier, and António de Andrade. After him are George Chapman and John Marston.