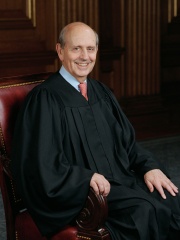 Stephen Gerald Breyer (; born August 15, 1938) is an Associate Justice of the Supreme Court of the United States. A lawyer by occupation, he became a professor and jurist before President Bill Clinton appointed him to the Supreme Court in 1994; Breyer is generally associated with its more liberal side.After a clerkship with Supreme Court Associate Justice Arthur Goldberg in 1964, Breyer became well-known as a law professor and lecturer at Harvard Law School, starting in 1967. There he specialized in administrative law, writing a number of influential textbooks that remain in use today. Read more on Wikipedia

Since 2007, the English Wikipedia page of Stephen Breyer has received more than 2,729,230 page views. His biography is available in 23 different languages on Wikipedia making him the 15th most popular judge.