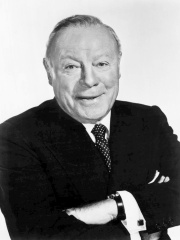 Edmund Gwenn (born Edmund John Kellaway, 26 September 1877 – 6 September 1959) was an English actor. On film, he is perhaps best remembered for his role as Kris Kringle in the Christmas film Miracle on 34th Street (1947), for which he won the Academy Award for Best Supporting Actor and the corresponding Golden Globe Award. He received a second Golden Globe and another Academy Award nomination for the comedy film Mister 880 (1950). Read more on Wikipedia

Since 2007, the English Wikipedia page of Edmund Gwenn has received more than 622,922 page views. His biography is available in 30 different languages on Wikipedia making him the 3,031st most popular actor.