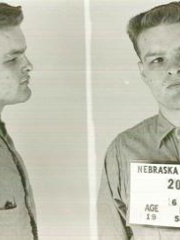 Charles Raymond "Charlie" Starkweather (November 24, 1938 – June 25, 1959) was an American spree killer who murdered eleven people in Nebraska and Wyoming between December 1957 and January 1958, when he was 19 years old. He killed ten of his victims between January 21 and January 29, 1958, the date of his arrest. Read more on Wikipedia

Since 2007, the English Wikipedia page of Charles Starkweather has received more than 1,720,595 page views. His biography is available in 15 different languages on Wikipedia making him the 125th most popular extremist.