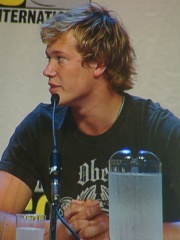 Edward John "Ed" Speleers (born 7 April 1988) is an English actor and producer. He is best known for playing the title role in the 2006 film Eragon, the antagonist character Steven Bonnet in the TV series Outlander, as well as a role in the TV series Downton Abbey. Read more on Wikipedia

Since 2007, the English Wikipedia page of Ed Speleers has received more than 1,281,372 page views. His biography is available in 26 different languages on Wikipedia making him the 6,918th most popular actor.

Among actors, Ed Speleers ranks 6,870 out of 8,832. Before him are Katie Barberi, Jane Levy, Danielle Campbell, Busy Philipps, Linnea Quigley, and Mandakini. After him are Spencer Treat Clark, Amy Carlson, Will Forte, Shiloh Fernandez, Brittany Byrnes, and Julie White.

Among people born in 1988, Ed Speleers ranks 237. Before him are Changmin, Tania Raymonde, Ljubomir Fejsa, Julia Görges, Christine and the Queens, and Ekaterina Makarova. After him are Kevin Love, Artjoms Rudņevs, Ivan Obradović, Julian Baumgartlinger, Jencarlos Canela, and Daniel Schwaab.