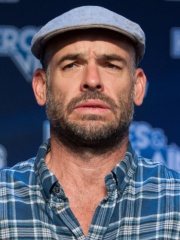 Paul Blackthorne (born 5 March 1969) is an English actor. Although born in Shropshire, England, he spent his early childhood on UK military bases in Britain and Germany.Blackthorne broke into acting via television commercials in England. His breakthrough commercial in the UK came in the Grim Reaper commercial for Virgin Atlantic, which was hugely successful. Read more on Wikipedia

Among actors, Paul Blackthorne ranks 6,756 out of 10,030. Before him are Kanan Devi, Carlo Rota, Jeremy Jordan, Bonnie Somerville, Dinah Manoff, and Noah Schnapp. After him are Kang So-ra, Elizabeth Marvel, Sophia Myles, Gary Valentine, Princess Theodora of Greece and Denmark, and Joan Caulfield.