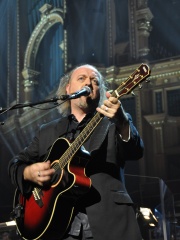 Mark Robert Bailey (born 13 January 1965), known by his stage name Bill Bailey, is an English comedian, actor and musician. Bailey is known for his role as Manny in the British sitcom Black Books and for his appearances on the British panel shows Never Mind the Buzzcocks, Have I Got News for You and QI, as well as his stand-up work. Read more on Wikipedia

Among actors, Bill Bailey ranks 8,139 out of 10,030. Before him are Rhoda Griffis, Rob Knox, Armando Iannucci, Parinya Charoenphol, Liana Liberato, and Corey Burton. After him are Barbara Perry, Alexandra Holden, Paula Marshall, Valérie Donzelli, J. B. Smoove, and Emma Bell.