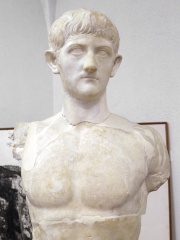 Drusus Julius Caesar (c. AD 8 – 33) was the adopted grandson and heir of the Roman emperor Tiberius, alongside his brother Nero. Born into the prominent Julio-Claudian dynasty, Drusus was the son of Tiberius' general and heir, Germanicus. Read more on Wikipedia

Drusus Caesar was the son of emperor Tiberius. He was a military commander who conquered Germania and expanded the Roman Empire to its largest size.

Among politicians, Drusus Caesar ranks 4,401 out of 15,577. Before him are Rudolf Brandt, Tage Erlander, Jia Xu, Theobald II, Count of Champagne, Charles Alexandre de Calonne, and Prayut Chan-o-cha. After him are Princess Regina of Saxe-Meiningen, Princess Christine Louise of Oettingen-Oettingen, Isabella, Queen of Armenia, John George II, Elector of Saxony, Anastasia of Kiev, and John Dickinson.