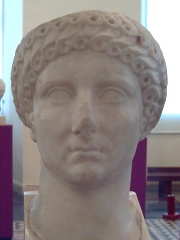 Agrippina "the Elder" (also, in Latin, Agrippina Germanici, "Germanicus's Agrippina"; c. 14 BC – AD 33) was a prominent member of the Julio-Claudian dynasty. She was the daughter of Marcus Vipsanius Agrippa (a close supporter of the first Roman emperor, Augustus) and Augustus' daughter, Julia the Elder. Her brothers Lucius and Gaius Caesar were the adoptive sons of Augustus, and were his heirs until their deaths in AD 2 and 4, respectively. Read more on Wikipedia

Agrippina the Elder was the mother of Nero and the wife of Emperor Claudius. She was most famous for her ambition to rule the Roman Empire, which led to her death.

Page views of Agrippina the Elders by language

Among politicians, Agrippina the Elder ranks 1,263 out of 15,577. Before her are Yaśodharā, Henry Clay, Philoctetes, Seonjo of Joseon, Carloman II, and Fuxi. After her are Emperor Kōkaku, Maurice, Franklin Pierce, Isabella Clara Eugenia, Teodoro Obiang Nguema Mbasogo, and Archduchess Maria Anna of Austria.

Others Born in 14 BC