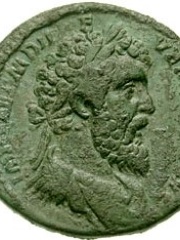 Marcus Didius Julianus (; 29 January 133 or 137 – 2 June 193) was Roman emperor for nine weeks from March to June 193, during the Year of the Five Emperors. Julianus had a promising political career, governing several provinces, including Dalmatia and Germania Inferior, and defeated the Chauci and Chatti, two invading Germanic tribes. He was even appointed to the consulship in 175 along with Pertinax as a reward, before being demoted by Commodus. Read more on Wikipedia

Didius Julianus was most famous for being the emperor of Rome for only three days. He was chosen by the Roman Senate to be emperor after the death of Pertinax.

Among politicians, Didius Julianus ranks 510 out of 15,577. Before him are Frederick William I of Prussia, Abdulmejid II, Norodom Sihanouk, Anna of Russia, Moctezuma II, and Syngman Rhee. After him are Ludwig II of Bavaria, Aurelian, Constantine II of Greece, Fulgencio Batista, Zhou Enlai, and Hans-Adam II, Prince of Liechtenstein.