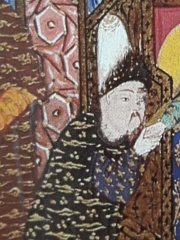 Devlet I Giray (1512–1577, r. 1551–1577, Crimean Tatar: I Devlet Geray, دولت كراى‎‎; Taht Alğan Devlet Geray, تخت آلغان دولت كراى‎‎) was a Crimean Khan. His long and eventful reign saw many highly significant historical events: the fall of Kazan to Russia in 1552, the fall of the Astrakhan Khanate to Russia in 1556, the burning of Moscow at the hands of the Crimean Tatars in 1571 and the defeat of the Crimeans near Moscow in 1572. Read more on Wikipedia

Devlet i Giray was a Crimean Khan who ruled from 1643 to 1687. He is most famous for his military conquests and the establishment of the Crimean Khanate.

Page views of Devlet I Girays by language

Among people born in 1512, Devlet I Giray ranks 8. Before him are James V of Scotland, Catherine Parr, Judah Loew ben Bezalel, Henry, King of Portugal, Niccolò dell'Abbate, and Manco Inca Yupanqui. After him are Robert Recorde, Mikołaj "the Red" Radziwiłł, Diego Laynez, Prospero Fontana, Sibylle of Cleves, and Galeazzo Alessi. Among people deceased in 1577, Devlet I Giray ranks 4. Before him are Eric XIV of Sweden, Ismail II, and Andrea Amati. After him are Anna of Saxony, Pedro Nunes, Maria of Portugal, Duchess of Viseu, Infanta Maria of Guimarães, Scipione Rebiba, Gjon Buzuku, Alvise I Mocenigo, and Rémy Belleau.