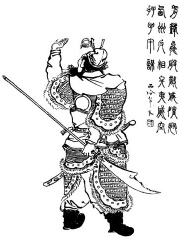 Wei Yan (pronunciation ) (died 234), courtesy name Wenchang, was a military general of the state of Shu Han during the Three Kingdoms period of China. Originally a subordinate of the warlord Liu Bei in the late Eastern Han dynasty, Wei Yan rose through the ranks and became a general when Liu Bei seized control of Yi Province (covering present-day Sichuan and Chongqing) in 214. His performance in battle helped him to become a prominent figure in the Shu military in a short period of time. Read more on Wikipedia

Wei yan is most famous for being a traditional Chinese medicine that is used to treat the common cold.

Among politicians, Wei Yan ranks 2,252 out of 15,710. Before him are Antiochus II Theos, Erich Koch, Inessa Armand, Sobekneferu, Nguyễn Phú Trọng, and Inge the Elder. After him are Wilhelm Marx, Phalaris, Harthacnut I of Denmark, Carlos Menem, Ólafur Ragnar Grímsson, and Richard of Shrewsbury, Duke of York.