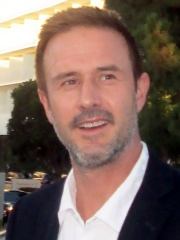 David Arquette (born September 8, 1971) is an American actor, former professional wrestler, director, producer, and fashion designer. In acting, he is best known for his role as Dewey Riley in the slasher film franchise Scream, for which he won a Teen Choice Award and two Blockbuster Entertainment Awards. As a professional wrestler, he is best remembered for his 2000 stint in World Championship Wrestling (WCW), where he won the WCW World Heavyweight Championship and headlined the Slamboree pay-per-view event; he has received praise in recent times for his work on the independent circuit.A member of the Arquette acting family, he first became known during the mid-1990s after starring in several Hollywood films aside from the Scream franchise, such as Wild Bill, Never Been Kissed, Buffy the Vampire Slayer, See Spot Run and Eight Legged Freaks. Read more on Wikipedia

Among actors, David Arquette ranks 1,709 out of 10,030. Before him are Mickey Hargitay, Rachel Félix, Miranda Richardson, Per Oscarsson, Peter Capaldi, and Felicity Huffman. After him are Sebastian Koch, Vince Vaughn, Brad Dexter, Peter van Eyck, Tom Bosley, and Sandra Dee.