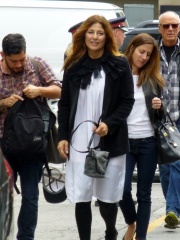 Catherine Ann Keener (born March 23, 1959) is an American actress. Considered one of the independent film industry's most reliable performers, Keener is known for portraying disgruntled and melancholic yet sympathetic women in independent films, as well as supporting roles in studio films. She has been twice nominated for the Academy Award for Best Supporting Actress for Being John Malkovich (1999) and for her portrayal of author Harper Lee in Capote (2005). Read more on Wikipedia

Since 2007, the English Wikipedia page of Catherine Keener has received more than 5,268,847 page views. Her biography is available in 36 different languages on Wikipedia making her the 2,387th most popular actor.