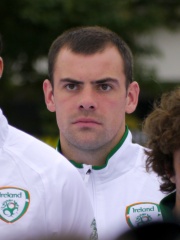 Darron Thomas Daniel Gibson (born 25 October 1987) is an Irish professional footballer from Derry, Northern Ireland, who plays as a midfielder for Salford City and the Republic of Ireland national team. He began his club career with Institute before joining Manchester United, for whom he made his professional debut in 2005. After loans with Belgium's Royal Antwerp and the Championship's Wolverhampton Wanderers, he won two League Cups, a Premier League title and the FIFA Club World Cup for United, totalling 60 games and 10 goals. Read more on Wikipedia

Since 2007, the English Wikipedia page of Darron Gibson has received more than 1,228,887 page views. His biography is available in 40 different languages on Wikipedia making him the 7,323rd most popular soccer player.