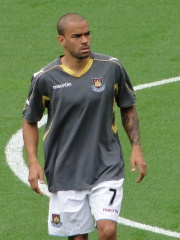 Kieron Courtney Dyer (born 29 December 1978) is an English former professional footballer who played as a midfielder. He is currently the U23’s manager at Ipswich Town Born in Ipswich, Dyer played youth football for his home club Ipswich Town before going on to make nearly 100 league appearances for the club's first team. He was sold to Newcastle United for £6 million, at the time the highest fee paid for an Ipswich player, and made nearly 200 appearances for Newcastle between 1999 and 2007. Read more on Wikipedia

Since 2007, the English Wikipedia page of Kieron Dyer has received more than 1,370,626 page views. His biography is available in 32 different languages on Wikipedia making him the 7,326th most popular soccer player.