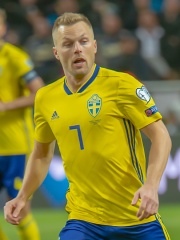 Bengt Ulf Sebastian Larsson (Swedish pronunciation: [ˈlɑ̌ːʂɔn]; born 6 June 1985) is a Swedish professional footballer who plays as a midfielder for Allsvenskan club AIK. After beginning his career at hometown club IFK Eskilstuna, Larsson was signed by Arsenal. He made three Premier League appearances for the Gunners, before joining Birmingham City, initially on loan for the 2006–07 season, before a permanent transfer in the winter of 2007. Larsson spent five years at Birmingham, experiencing promotion to, and relegation from, the Premier League on two occasions. Read more on Wikipedia