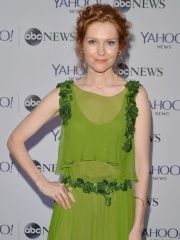 Darby Leigh Stanchfield (born April 29, 1971) is an American actress. She is best known for her role as Abby Whelan in the ABC political drama series Scandal (2012–2018). Stanchfield is also known for roles as April Green in the CBS post-apocalyptic drama series Jericho (2006–07), and as Helen Bishop in the AMC period drama series Mad Men (2007–08). Read more on Wikipedia

Since 2007, the English Wikipedia page of Darby Stanchfield has received more than 1,373,302 page views. Her biography is available in 18 different languages on Wikipedia making her the 7,356th most popular actor.