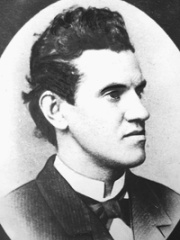 Ciprian Porumbescu (Romanian pronunciation: [t͡ʃipriˈan porumˈbesku]; born Ciprian Gołęmbiowski on October 14, 1853 – June 6, 1883) was a Romanian composer born in Șipotele Sucevei in Bukovina (now Shepit, Putyla Raion, Ukraine). He was among the most celebrated Romanian composers of his time; his popular works include Crai nou, Trei culori, Song for the 1st of May, Ballad for violin and piano, and Serenada. In addition, he composed the music for the Romanian patriotic song "Pe-al nostru steag e scris Unire" ("Unity is Written on our Flag"), which was Romania's anthem from 1975 to 1977 and is currently used for Albania's national anthem, "Himni i Flamurit". Read more on Wikipedia

Since 2007, the English Wikipedia page of Ciprian Porumbescu has received more than 99,058 page views. His biography is available in 22 different languages on Wikipedia making him the 589th most popular composer.

Among COMPOSERS In Ukraine