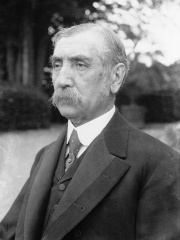 Damat Mehmed Adil Ferid Pasha (Ottoman Turkish: محمد عادل فريد پاشا Turkish: Damat Ferit Paşa;‎ 1853 – 6 October 1923), known simply as Damat Ferid Pasha, was an Ottoman liberal statesman, who held the office of Grand Vizier, the de facto prime minister of the Ottoman Empire, during two periods under the reign of the last Ottoman Sultan Mehmed VI, the first time between 4 March 1919 and 2 October 1919 and the second time between 5 April 1920 and 21 October 1920. Officially, he was brought to the office a total of five times, since his cabinets were recurrently dismissed under various pressures and he had to present new ones. Read more on Wikipedia

Among politicians, Damat Ferid Pasha ranks 8,355 out of 15,577. Before him are Autobiography of Harkhuf, Indulf, Cenwalh of Wessex, Augustinos Kapodistrias, John A. Macdonald, and Kilij Arslan III. After him are Michel Barnier, József Antall, Thiệu Trị, Jan Stráský, Kazys Grinius, and Abbas El Fassi.