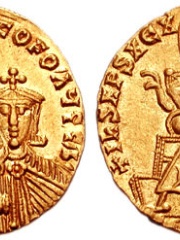 Christopher Lekapenos or Lecapenus (Greek: Χριστόφορος Λακαπηνός) was the eldest son of Emperor Romanos I Lekapenos (r. 920–944) and co-emperor of the Eastern Roman Empire from 921 until his death in 931. Christopher was given the position of megas hetaireiarches (commander of the palace guard) in spring 919, after Romanos assumed the position of basileopator. Read more on Wikipedia

Since 2007, the English Wikipedia page of Christopher Lekapenos has received more than 38,521 page views. His biography is available in 21 different languages on Wikipedia making him the 8,670th most popular politician.

Among politicians, Christopher Lekapenos ranks 8,624 out of 14,801. Before him are Philipp von Boeselager, Émile Ollivier, Blanche of France, Duchess of Orléans, Dmitry of Tver, Audoin, and Oleg Gordievsky. After him are Elephant, Robert Mueller, Gaius Sosius, Sultan bin Salman Al Saud, Constantin Dăscălescu, and Minamoto no Yoshiie.