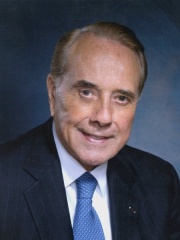 Robert Joseph Dole (born July 22, 1923) is an American retired politician, statesman, and attorney who represented Kansas in the U.S House of Representatives from 1961 to 1969 and in the U.S. Senate from 1969 to 1996, serving as the Republican Leader of the United States Senate from 1985 until 1996. He was the Republican presidential nominee in the 1996 election and the party's vice presidential nominee in the 1976 election. Born in Russell, Kansas, Dole established a legal career in Russell after serving with distinction in the United States Army during World War II. After a stint as Russell County Attorney, he won election to the House of Representatives in 1960. Read more on Wikipedia

Since 2007, the English Wikipedia page of Bob Dole has received more than 5,449,843 page views. His biography is available in 39 different languages on Wikipedia making him the 9,452nd most popular politician.