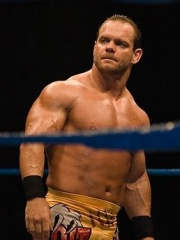 Christopher Michael Benoit (; May 21, 1967 – June 24, 2007) was a Canadian professional wrestler. During his 22-year career, Benoit worked for numerous promotions including the World Wrestling Federation/World Wrestling Entertainment (WWF/WWE), World Championship Wrestling (WCW), Extreme Championship Wrestling (ECW), and New Japan Pro-Wrestling (NJPW). Industry journalist Dave Meltzer considered him "one of the top 10, maybe even the top 5, all-time greats".Benoit held 22 championships between WWF/WWE, WCW, NJPW, and ECW. He was a two-time world champion, having been a one-time WCW World Heavyweight Champion, and a one-time World Heavyweight Champion in WWE; he was booked to win a third world championship at a WWE event on the night of his death. Read more on Wikipedia

Since 2007, the English Wikipedia page of Chris Benoit has received more than 7,881,258 page views. His biography is available in 41 different languages on Wikipedia making him the 32nd most popular wrestler.