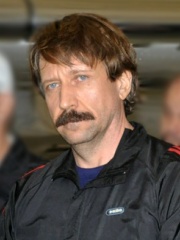 Viktor Anatolyevich Bout (; Russian: Ви́ктор Анато́льевич Бут; born 13 January 1967) is a Russian arms dealer. An entrepreneur and former Soviet military translator, he reportedly used his multiple air transport companies to smuggle weapons since the collapse of the Soviet Union from Eastern Europe to Africa and the Middle East during the 1990s and early 2000s. Bout gained the nicknames the Merchant of Death and Sanctions Buster after Peter Hain of the British Foreign Office read a report to the United Nations in 2003 on Bout's wide-reaching operations, extensive clientele, and willingness to bypass embargoes.On 6 March 2008, Bout was arrested in Thailand on terrorism charges by the Royal Thai Police in cooperation with American authorities and INTERPOL. The U.S. Ambassador to Thailand Eric G. John requested his extradition under the Extradition Act with Thailand, which was eventually mandated by the Thai High Court in August 2010. Bout was accused of intending to smuggle arms to the Revolutionary Armed Forces of Colombia (FARC) for use against U.S. forces in Colombia, but denied his charges and predicted an acquittal.On 2 November 2011, Bout was convicted by a jury in a Manhattan federal court of conspiracy to kill U.S. Read more on Wikipedia

Among EXTREMISTS In Tajikistan