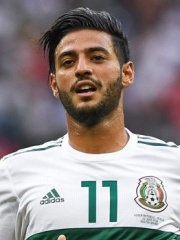 Carlos Alberto Vela Garrido (born 1 March 1989) is a Mexican professional footballer who captains and plays for Major League Soccer club Los Angeles FC. Described as a versatile player who can play as a forward, winger, and attacking midfielder, Vela is known for being a creative player and prolific scorer.Vela started his career at Mexican club Guadalajara, where he caught the eye of various European clubs after finishing as the top scorer at the 2005 FIFA U-17 World Championship, eventually joining Premier League club Arsenal that year. After joining Arsenal, he had loan spells at Spanish clubs Salamanca and Osasuna, as well as fellow English club West Bromwich Albion, settling with Real Sociedad in 2011, initially on loan and then permanently the following season. In his six-year spell with La Real, Vela played in 250 matches and scored 73 goals. Read more on Wikipedia