This page contains a list of the greatest Mexican Soccer Players. The pantheon dataset contains 16,880 Soccer Players, 146 of which were born in Mexico. This makes Mexico the birth place of the 24th most number of Soccer Players behind Switzerland and Nigeria. 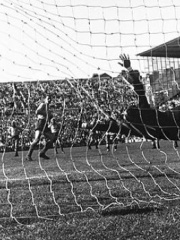 With an HPI of 57.23, Antonio Carbajal is the most famous Mexican Soccer Player.  His biography has been translated into 24 different languages on wikipedia. 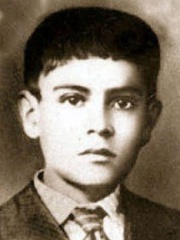 With an HPI of 56.67, José Sánchez del Río is the 2nd most famous Mexican Soccer Player.  His biography has been translated into 16 different languages.

José Luis Sánchez del Río (March 28, 1913 – February 10, 1928) was a Mexican Cristero who was put to death by government officials because he refused to renounce his Catholic faith. His death was seen as a largely political venture on the part of government officials in their attempt to stamp out dissent and crush religious freedom in the area. He was dubbed "Joselito." He was declared to be venerable on June 22, 2004, by Pope John Paul II and was beatified by Pope Benedict XVI – through the Cardinal-Prefect of the Congregation of the Causes of Saints – on November 20, 2005, in Mexico. Pope Francis approved a miracle attributed to him on January 21, 2016, allowing for his canonization to take place; a date was determined at a consistory on March 15, 2016, and he was proclaimed to be a saint on October 16, 2016. 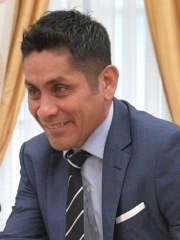 With an HPI of 54.71, Jorge Campos is the 3rd most famous Mexican Soccer Player.  His biography has been translated into 34 different languages.

Jorge Campos Navarrete (born 15 October 1966) is a Mexican former professional footballer who played as a goalkeeper. A notable player of Mexico in the 1990s and early 2000s, Campos was an eccentric player, known for his constant play outside the penalty area – often functioning as a sweeper-keeper, as well as his acrobatic, risky, and flamboyant style of goalkeeping, and his colourful playing attire. His main strengths as a goalkeeper were his leaping ability, athleticism, and speed when rushing off his line, as well as his ability to organize his defense, which enabled him to overcome his short stature. He was regarded as one of the best goalkeepers of his generation.Campos also made for an effective striker, an uncommon example of versatility in football that is rarely seen in today's game. At times, he would start a game in goal, and transfer upfield later in the match, mostly at the club level. In total, he scored 35 goals throughout his career, scoring all but one while playing for UNAM. His trademark, self-designed bright kits contributed to his popularity. 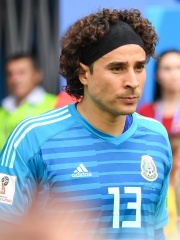 With an HPI of 50.35, Guillermo Ochoa is the 4th most famous Mexican Soccer Player.  His biography has been translated into 54 different languages.

Francisco Guillermo Ochoa Magaña (Spanish pronunciation: [ɡiˈʝeɾmo oˈtʃo.a]; born 13 July 1985), commonly referred to as Memo, is a Mexican professional footballer who is a goalkeeper for Liga MX club América, which he captains, and the Mexico national team. Ochoa made his senior-level professional debut for Club América in 2004 in a Mexican league match against Monterrey. He won his first league title in 2005 and was the club's first-choice goalkeeper up until 2011, making over 200 appearances for América. That summer Ochoa was transferred to Ajaccio in France. He spent three seasons with the club until their relegation from Ligue 1. In 2014, Ochoa joined Málaga but failed to establish himself in the team. In July 2016, he joined Granada on a season-long loan. In July 2017, he joined Standard Liège. He returned to Club América in August 2019. A Mexican international since 2005, Ochoa received his first cap at age 20 in a friendly match against Hungary. Having been included in the squads for the 2006, 2010, 2014, 2018 and 2022 FIFA World Cup, Ochoa has gained international recognition for his consistency and big game performances in the competition over multiple iterations. He has also appeared at the 2013 and 2017 FIFA Confederations Cup, the 2004 Summer Olympics and 2020 Summer Olympics, the 2007 Copa América, the Copa América Centenario, the 2007, 2009, 2015, and 2019 CONCACAF Gold Cup, and was originally in the 2011 CONCACAF Gold Cup before being suspended from the competition due to false doping allegations. He is the most capped goalkeeper in the history of the national side, and currently sixth on the all-time list with 133 appearances. 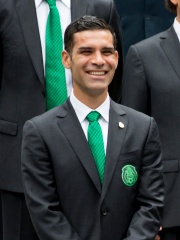 With an HPI of 49.81, Rafael Márquez is the 5th most famous Mexican Soccer Player.  His biography has been translated into 59 different languages.

Rafael Márquez Álvarez (Spanish: [rafaˈel ˈmaɾkes] (listen); born 13 February 1979) is a Mexican former professional footballer and current head coach of Spanish team Barcelona Atlètic. Nicknamed El Káiser, he is regarded as the best defender in Mexico's history and one of the best Mexican players of all time.Márquez began his career with Atlas in 1996, playing in over 70 games with the club before moving to France in 1999 with Monaco, where he won the Ligue 1 title. In 2003, Márquez transferred to Barcelona, becoming the first ever Mexican to represent the club. He would go on to play in over 200 games during seven seasons with the Blaugrana, winning numerous championships. In 2006, he became the first Mexican player to win the UEFA Champions League when Barcelona defeated Arsenal in the final. In 2010, Márquez joined the New York Red Bulls of Major League Soccer. After being released from the club in 2012, he moved back to Mexico, this time to play for León, captaining the team to back-to-back Liga MX titles in 2013 and 2014. Márquez then transferred to Hellas Verona of the Italian Serie A. He returned to boyhood club Atlas in 2015, and announced his retirement from football in April 2018. Márquez is the third most-capped player in the history of the Mexico national football team, earning 147 caps throughout his career. In 2018, he became only the fourth player to play for his national team in five consecutive editions of the FIFA World Cup, alongside compatriot Antonio Carbajal, Lothar Matthäus, and Gianluigi Buffon, appearing in the 2002, 2006, 2010, 2014, and 2018 tournaments. He is also the Mexican player with the most World Cup matches played with 19. With the national team, Márquez won the 1999 FIFA Confederations Cup, and the 2003 and 2011 editions of the CONCACAF Gold Cup. 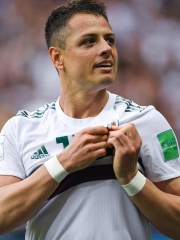 With an HPI of 49.68, Javier Hernández is the 6th most famous Mexican Soccer Player.  His biography has been translated into 66 different languages.

Javier Hernández Balcázar (Spanish: [xaˈβjeɾ eɾˈnandez βalˈkasaɾ] (listen); born 1 June 1988), commonly known by the nickname Chicharito ([tʃitʃaˈɾito], Mexican Spanish: little pea), is a Mexican professional footballer who plays as a striker for Major League Soccer club LA Galaxy. Hernández began his senior club career at age 18 in 2006, playing for Guadalajara, where he won the Primera División. In 2010, Hernández signed for Manchester United, becoming the club's first Mexican player. During his five years with United, he amassed over 150 appearances and scored 59 goals, winning two Premier League titles and reached the 2011 UEFA Champions League Final, as well as setting the then record for the fifth-best minutes-per-goal ratio (130.2) in league history. Hernández departed the club on loan to Real Madrid in 2014, and in 2015 he joined Bayer Leverkusen on a permanent deal. Two years later, Hernández returned to England and signed for West Ham United. In 2019, he signed for Sevilla before joining LA Galaxy the following year. A Mexican international, Hernández is the country's all-time leading goalscorer. He made his debut for the national team in September 2009 in a friendly match against Colombia. He has represented Mexico at the 2010 FIFA World Cup, the 2011 CONCACAF Gold Cup, the 2013 FIFA Confederations Cup, the 2014 FIFA World Cup, the Copa América Centenario, the 2017 FIFA Confederations Cup and the 2018 FIFA World Cup. He was the 2011 Gold Cup's top scorer with seven goals and was named the most valuable player of the tournament.

With an HPI of 49.24, Tomás Balcázar is the 7th most famous Mexican Soccer Player.  His biography has been translated into 17 different languages.

Tomás Balcázar González (4 May 1931 – 26 April 2020) was a Mexican professional footballer who played as a forward. He played at club level for Guadalajara, and internationally for Mexico. 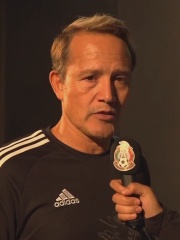 With an HPI of 49.09, Luis Hernández is the 8th most famous Mexican Soccer Player.  His biography has been translated into 28 different languages.

Luis Arturo Hernández Carreón (born 22 December 1968) is a Mexican former professional footballer who played as a striker and is the fourth all-time leading scorer of the Mexico national team with 35 goals, and the joint-highest goalscorer in World Cups. He is widely regarded as one of Mexico's most talented strikers.

With an HPI of 48.81, Juan Carreño is the 9th most famous Mexican Soccer Player.  His biography has been translated into 22 different languages.

Juan Carreño Lara (14 August 1909 – 16 December 1940) was a Mexican footballer, and a participant of the 1930 FIFA World Cup. He was the first Mexican to score in the FIFA World Cup[1]. During this tournament he was connected with Atlante F.C. He also scored Mexico’s first goal in Olympic Games in Amsterdam 1928. He died of appendicitis aged 31.

With an HPI of 47.98, Manuel Rosas is the 10th most famous Mexican Soccer Player.  His biography has been translated into 21 different languages.

Manuel Rosas Sánchez (29 February 1912 in Mexico City – 20 February 1989), nicknamed Chaquetas, was a Mexican footballer who participated in the 1930 FIFA World Cup. He was the first player in the history of FIFA World Cup who scored a goal from the penalty kick spot (against Argentina). With the first goal he scored during the World Cup, he became, at the time, the youngest player to have scored in the FIFA World Cup, a record later broken by Pelé, Rosas is still the second youngest player to have scored at a world cup. He was also the first Mexican player to score multiple goals in World Cup play (the first to score more than two goals was Luis Hernandez, 68 years later) and the first player to score an own goal in the history of FIFA World Cup (against Chile).His brother, Felipe Rosas, also played in the 1930 World Cup. Both were players of Atlante F.C. during the tournament.

Which Soccer Players were alive at the same time? This visualization shows the lifespans of the 23 most globally memorable Soccer Players since 1700.