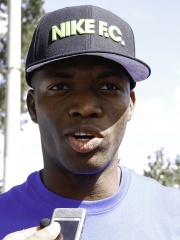 Enner Remberto Valencia Lastra (born 4 November 1989) is an Ecuadorian professional footballer who plays as a forward for Liga MX club Tigres UANL and the Ecuador national team.He has previously played for Emelec in Ecuador, where he won the 2013 Ecuadorian Serie A and was awarded the Copa Sudamericana Golden Boot in 2013. Valencia also played for Pachuca in Mexico, being awarded the Liga MX Golden Boot in the 2014 Clausura tournament. Read more on Wikipedia

Since 2007, the English Wikipedia page of Enner Valencia has received more than 891,539 page views. His biography is available in 41 different languages on Wikipedia making him the 3,692nd most popular soccer player.

Among SOCCER PLAYERS In Ecuador