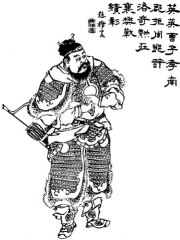 Cao Ren (pronunciation ) (168 – 6 May 223), courtesy name Zixiao, was a military general serving during the late Eastern Han dynasty of China under the warlord Cao Cao, who was also his older second cousin. He continued serving in the state of Cao Wei – founded by Cao Cao's son and successor, Cao Pi – during the Three Kingdoms period. He played a significant part in assisting Cao Cao in the civil wars leading to the end of the Han dynasty. Read more on Wikipedia

Since 2007, the English Wikipedia page of Cao Ren has received more than 127,734 page views. His biography is available in 20 different languages on Wikipedia. Cao Ren is the 315th most popular military personnel (down from 288th in 2019), the 220th most popular biography from China (down from 202nd in 2019) and the 22nd most popular Chinese Military Personnel.

Cao Ren is a general who served in the Three Kingdoms period. He was a trusted advisor of Liu Bei, the founder of the Kingdom of Shu. Cao Ren was famous for his loyalty and faithfulness to his lord.