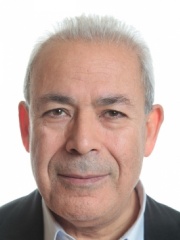 Burhan Ghalioun (Arabic: برهان غليون) (born 11 February 1945 in Homs, Syria), is a French-Syrian professor of sociology at the Université de Paris III Sorbonne University in Paris, and the first chairman of the Syrian opposition Transitional National Council (SNC). He was named chairman on 29 August 2011. His chairmanship was criticized for his perceived closeness to the Muslim Brotherhood, his early reluctance to arm opposition forces, and what opponents called the autocratic nature of his leadership. Read more on Wikipedia

Since 2007, the English Wikipedia page of Burhan Ghalioun has received more than 52,849 page views. His biography is available in 15 different languages on Wikipedia making him the 11,931st most popular politician.