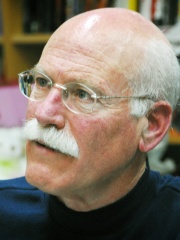 Tobias Jonathan Ansell Wolff (born June 19, 1945) is an American short story writer, memoirist, novelist, and teacher of creative writing. He is known for his memoirs, particularly This Boy's Life (1989) and In Pharaoh's Army (1994). He has written four short story collections and two novels including The Barracks Thief (1984), which won the PEN/Faulkner Award for Fiction. Wolff received a National Medal of Arts from President Barack Obama in September 2015.His academic career began at Syracuse University (1982–1997) and, since 1997, he has taught at Stanford University, where he is the Ward W. and Priscilla B. Read more on Wikipedia

Since 2007, the English Wikipedia page of Tobias Wolff has received more than 679,996 page views. His biography is available in 19 different languages on Wikipedia making him the 4,264th most popular writer.