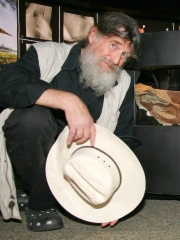 Robert Thomas Bakker (born March 24, 1945) is an American paleontologist who helped reshape modern theories about dinosaurs, particularly by adding support to the theory that some dinosaurs were endothermic (warm-blooded). Along with his mentor John Ostrom, Bakker was responsible for initiating the ongoing "dinosaur renaissance" in paleontological studies, beginning with Bakker's article "Dinosaur Renaissance" in the April 1975 issue of Scientific American. Read more on Wikipedia

Since 2007, the English Wikipedia page of Robert T. Bakker has received more than 163,663 page views. His biography is available in 24 different languages on Wikipedia making him the 74th most popular archaeologist.

Most Popular Archaeologists in Wikipedia

Among ARCHAEOLOGISTS In United States