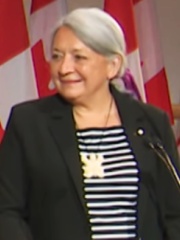 Mary Jeannie May Simon (in Inuktitut syllabics: ᒥᐊᓕ ᓴᐃᒪᓐ, Inuktitut: Ningiukudluk; born August 21, 1947) is a Canadian civil servant, diplomat, and former broadcaster who has served as the 30th governor general of Canada since July 26, 2021. Simon is Inuk, making her the first Indigenous person to hold the office.Simon was born in Fort Severight (now Kangiqsualujjuaq), Quebec. She briefly worked as a producer and announcer for the CBC Northern Service in the 1970s before entering public service, serving on the board of the Northern Quebec Inuit Association and playing a key role in the Charlottetown Accord negotiations. Read more on Wikipedia

Among politicians, Mary Simon ranks 11,073 out of 15,577. Before her are Prince Arnulf of Bavaria, José Napoleón Duarte, Mehdi Karroubi, Theodora Komnene, Queen of Jerusalem, Prince Karl of Auersperg, and Konoe Sakihisa. After her are Beatrice of France, Lucius Calpurnius Piso Frugi Licinianus, Muhammad Shah of Brunei, Kevin Rudd, Dirk VII, Count of Holland, and Mari Alkatiri.