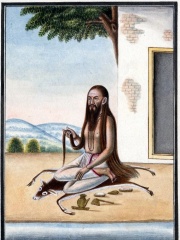 Bharadwaja, also referred to as Guru (IAST: Bharadvāja) or Bharadvaja, Bṛhaspatya, was one of the revered Vedic sages (maharishi) in Ancient India. He was a renowned scholar, economist, and physician. His contributions to ancient Indian literature, specifically the Puranas and Rig Veda, provide significant insight into ancient Indian society. Read more on Wikipedia

Since 2007, the English Wikipedia page of Bharadwaja has received more than 731,833 page views. His biography is available in 18 different languages on Wikipedia making him the 964th most popular philosopher.

Page views of Bharadwajas by language