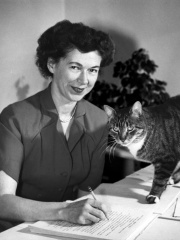 Beverly Atlee Cleary (née Bunn; April 12, 1916 – March 25, 2021) was an American writer of children's and young adult fiction. One of America's most successful authors, 91 million copies of her books have been sold worldwide since her first book was published in 1950. Some of her best known characters are Ramona Quimby and Beezus Quimby, Henry Huggins and his dog Ribsy, and Ralph S. Mouse.The majority of Cleary's books are set in the Grant Park neighborhood of northeast Portland, Oregon, where she was raised, and she has been credited as one of the first authors of children's literature to figure emotional realism in the narratives of her characters, often children in middle-class families. Read more on Wikipedia