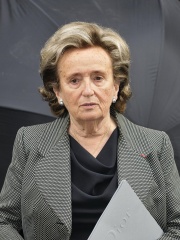 Since 2007, the English Wikipedia page of Bernadette Chirac has received more than 160,610 page views. Her biography is available in 20 different languages on Wikipedia making her the 507th most popular companion.

Among companions, Bernadette Chirac ranks 513 out of 586. Before her are Toda of Pamplona, Abbad ibn Bishr, Joan of the Tower, Agnes of Brandenburg, Princess Louise of Denmark, and Prince Gustav of Denmark. After her are Princess Augusta of Prussia, Alice of Antioch, Aquilia Severa, Mécia Lopes de Haro, Mastani, and Joan of England, Queen of Scotland.