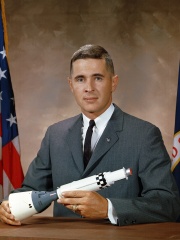 William Alison Anders (born October 17, 1933) is a retired United States Air Force major general, former electrical engineer, nuclear engineer, NASA astronaut, and businessman. In December 1968, as a crew member of Apollo 8, he was one of the first three people to leave low Earth orbit and travel to the Moon. Along with fellow astronauts Frank Borman and Jim Lovell, Anders circled the Moon ten times, and broadcast live images and commentary back to Earth. During one of the mission's lunar orbits he photographed the iconic image, Earthrise.Apart from his professional and military careers, Anders was the U.S. Read more on Wikipedia

Since 2007, the English Wikipedia page of William Anders has received more than 529,130 page views. His biography is available in 47 different languages on Wikipedia making him the 29th most popular astronaut.