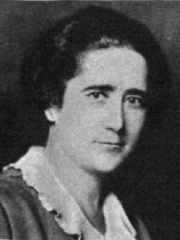 Clara Campoamor Rodríguez (12 February 1888 – 30 April 1972) was a Spanish politician, lawyer and writer, considered by some the mother of the Spanish feminist movement. She was one of the main promoters for women's suffrage in Spain, included in the Spanish Constitution of 1931 in part owing to her advocacy. She was elected to the Constituent Assembly in 1931, before women were allowed to vote themselves. Read more on Wikipedia

Among politicians, Clara Campoamor ranks 6,926 out of 15,577. Before her are Inge II of Norway, Tiberius Coruncanius, Yvonne de Gaulle, Hermann I, Landgrave of Thuringia, Ali Bey al-Kabir, and Hadım Sinan Pasha. After her are Beorhtric of Wessex, Princess Helena of Nassau, Adaloald, Princess Sophie Antoinette of Brunswick-Wolfenbüttel, Macrianus Minor, and Takahashi Korekiyo.