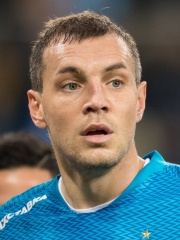 Artyom Sergeyevich Dzyuba (Russian: Артём Сергеевич Дзюба, IPA: [ɐˈrtʲɵm sʲɪrˈɡʲe(j)ɪvʲɪtɕ ˈdzʲubə]; born 22 August 1988) is a Russian professional footballer who plays as a striker for FC Zenit Saint Petersburg and captains the Russia national team. He began his career with Spartak Moscow, debuting in 2006 and making 166 appearances and scoring 38 goals. He also had two loans each at Tom Tomsk and Rostov, winning the 2013–14 Russian Cup with the latter. Read more on Wikipedia

Since 2007, the English Wikipedia page of Artem Dzyuba has received more than 789,082 page views. His biography is available in 49 different languages on Wikipedia making him the 3,238th most popular soccer player.