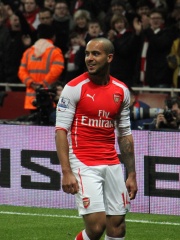 Theo James Walcott (born 16 March 1989) is an English professional footballer who plays as a forward for Premier League club Everton and the English national team. Walcott is a product of the Southampton Academy and started his career with Southampton before joining Arsenal for £5 million in 2006. His speedy pace and ball crossing led his manager Arsène Wenger to deploy him on the wing for most of his career. Read more on Wikipedia

Since 2007, the English Wikipedia page of Theo Walcott has received more than 3,659,329 page views. His biography is available in 61 different languages on Wikipedia making him the 2,750th most popular soccer player.